1862 and Mortimer Grimshaw is travelling back to his native Lancashire with Joseph Barker. He’s heading to Blackburn to address mill workers hoping that his past as a labour activist will give him sway over the crowds. It’s a bold move, he’s still limping from a pasting he received outside Clitheroe last year. The striking mill workers battered him and his mates and stoned them out of town. The workers didn’t go back to work (despite his best efforts to break the strike) and he still felt the bruises a year on. “Lancashire, doesn’t do as it’s told,” he muttered as they approached Accrington. Joseph Barker sighs, “What a dump.”  Barker, a former chartist revolutionary has returned from America and now proclaims the British government as “the best in the world.” He’s sure that they can turn the heads of the weavers and mill workers to the confederate cause. Blackburn will be the first of a tour designed to gain working class support for the confederacy and slavery. “What. A. Dump.” he mutters again. They are both nervous, this is the first meeting and it needs to go well. They are speaking from the perspective of ‘relief for Lancashire.’ Things are bad here, the cotton famine means that without raw cotton from the plantations of the American South , there is no work in the weaving sheds of Lancashire, and the North. People are starving in Blackburn 1862, and both the confederacy and the ruling class of England, expect the mill workers to support the south. There are 27,000 people out of work and some 160,000 on short time. Barker turns to Grimshaw, “What a dump…..”

John Wayne on the telly. Sunday afternoon, at my nan’s house. He wears the blue uniform of the North. A tunic of deepest blue, edged in gold, crossed sabres on his cowboy hat with heavy leather gloves and chestnut saddle on a white horse. The landscape is endless, he is huge and beautiful and everything looks at once like the past and the future.  It is 1862 here as well, and everything  is new, shiny and bright. It is America.

Once they get rid of those troublesome Indians.

In Blackburn five thousand have turned out and the local M.P. John Hopwood has bottled it. Grimshaw takes the stage and asks if it’s right that “ six million white men – of your own race – should be enslaved in order that four million negroes go free ?”

The crowd hiss and William Billington flicks the V’s at the stage. His friend Crossley from the Blackburn Weavers association challenges and asks that the weavers ‘uphold the policy of President Lincoln.’ Only twelve vote against and the crowd cheers. Mortimer Grimshaw loses control of the meeting and spotting some Darwen Casuals in the audience remembers his kicking outside Clitheroe and decides to bolt. As they leg it out the back, the weavers hold another vote and condemn Grimshaw and Hopwood (who at least had the sense not to turn up.) Billington is smiling as the crowd disperse. Crossley turns to him, “They’ll be back.” Billington smiles, “I know lad. I know”

Abraham Lincoln stands over a map in a war room somewhere in the North of America. He knows the war is turning against the South and knows it is in no small part due to the weavers in Lancashire. He has received a letter telling him that  meetings that started in Blackburn, caused riots in Stalybridge and concluded in the city of Manchester, where weavers erupted finally against the South, and pledged support for the abolition of slavery. He has a sense of the world changing, and he is at the helm. “Send these people food food,” he barks to an aide. “They’re starving that we might prevail.”

James Kenyon is twelve years old and stood at the back of the meeting. It’s all Blackburn is talking about, the streets murmur with tales of the cowboys and the slaves and the horses and the pistols and the mountains and the indians. The Indians. He tries to imagine these men everyone talks of,  his head spinning as he drifts off to sleep.

He dreams of the wild west, of cowboys and Indians and the future.

He can almost see it.

Artist Jamie Holman and Blackburn with Darwen Borough Council invite the public to join them at high noon at 40 Northgate to parade a new banner celebrating the legacy of film-makers, Mitchell and Kenyon, who operated from there, the centenary of the Cotton Exchange becoming a cinema and the unexpected impact the town’s cotton history had on the world.

In 1899 Mitchell and Kenyon produced Kidnapping by Indians, a film that is now recognised as the first western ever made, which will be shown at the Cotton Exchange, along with others, with refreshments at the end of the parade. 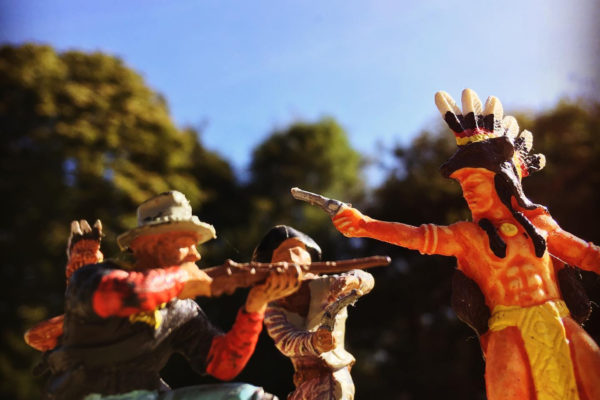