A new archive has been created to capture the memories of the rave party scene in Blackburn, Lancashire. 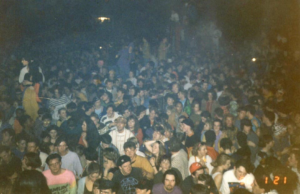 At the end of the 1980s, a small and determined group of young people reclaimed the empty warehouses and mills of Blackburn so they could throw ‘Parties for the People – by the people.’

The media called them Raves.

This is the people’s story…

FLASHBACK is a new archive that has captured the oral histories of the individuals who attended the Acid House parties in Blackburn between 1988 and 1991, preserving the moments these people choose to remember and celebrate, 30 years on. This new archive has been created in response to work produced by British Textile Biennial 2019 artist-in-residence Jamie Holman and artist Alex Zawadzki – who are together known as Uncultured Creatives.

It will be launched online at www.acidhouseflashback.co.uk on Friday 24 April 2020 and will later be available at Lancashire Archives.With over 7 hours of recollections to listen to with 33 participants, these will be joined by further interviews after the launch. FLASHBACK captures a significant moment that transformed UK youth culture as well as providing a snapshot of the rebellious spirit of 20th century Northern England.

Using the empty mills and factory spaces on their doorstep, Blackburn’s youth gathered in large numbers to find the party, get in to the party and not let the police stop the party! This is the story of one of Blackburn’s greatest working-class revolutions, interchangeably known as Acid House, Raves or most commonly to locals as ‘The Parties.’

Purportedly 10,000 people were a part of Blackburn’s acid house era. Ravers, DJs, the organisers, police and politicians were all invited to tell their story. They each have a different story or perspective. These interviews are an archive of unedited, unobstructed memories from the era, without a biased context or narrative imposed by the interviewers.

The archive presents these stories without defining a political or social context or viewpoint often seen in documentaries or articles about the era. All participants were invited to respond to a short set of questions that established their name, age and where they lived at the time, before inviting them to share their memories, good and bad, of the era, whether they were former police officers, DJs, party goers, organisers, sound technicians or politicians.

The website www.acidhouseflashback.co.uk creates a future archive for researchers to use and contributes to an understanding of the cultural heritage of Blackburn and East Lancashire.

“Thousands of people, you know…with this kind of energy, flowing through them, and no hostile energy. It was like it was dispelled. It were gone! And I am proud today to be able to be sat here today and say…I were part of that.”  Shack

“It felt like we were involved in a revolution. It really did though! It was just in this one small Northern town. It did feel like we were going to take over. The police just couldn’t deal with it, and we just…yeah, we felt revolutionary.”  Mark

British Textile Biennial artist-in-residence Jamie Holman’s work gave a far-reaching insight into the cultural products of Blackburn’s working classes starting with workers’ banners and paintings by the 19th century Blackburn artist James Sharples, poetry by William Billington, and the films of Mitchel and Kenyon making direct links to the creative outpouring in the warehouse raves of the 1980’s when the grandchildren of cotton mill workers transformed former workplaces into spaces of joy and liberation. Through his investigations into acid house, terrace culture and folklore,Holman traced art’s power to transform in the hands of the historically disempowered. A major showcase of 1200 pairs of rare adidas trainers, the largest to date, was presented at the British Textile Biennial as a result of Holman’s research. An extensive engagement programme funded by The National Lottery Heritage Fund started towards the close of the Biennial. This sought to unearth, celebrate and archive the neglected but crucial cultural heritage of two generations of largely young males through their choice of trainers, from when they stopped fighting and started dancing, organising mass parties in empty warehouses and mills. The programme was developed and driven by a core group of men who were the originators of that heritage.